Using RAID in Your Homebuilt Computer

RAID stands for Redundant Array of Independent Disks. It's a way of using more than one hard drive in an "array" to provide fault tolerance (the machine keeps running if one drive fails), increased hard drive access speed, or both. This can be done by using a hardware RAID controller either integrated in or added to the motherboard ("hardware RAID"), or using software running on the computer's operating system ("software RAID"). When I refer to the "RAID controller" on this page without specifying hardware or software, it means either one.

There are many RAID schemes, but they all depend on these two basic concepts:

Reasons Not to Use RAID

In my opinion, RAID is not something that most PC users need, especially with the high speeds and reliability of modern SSD drives. In fact, it's something I recommend against unless you really have a need for it. Here's why.

For most users, in my opinion, RAID simply isn't worth the hassle or expense.

Reasons to Use RAID

All that being said, there are cases when RAID makes sense. They all come under two broad use cases:

There are many possible RAID configurations, which are referred to as "levels." I'm only going to talk about the four that I think will be of the most interest to computer-building hobbyists. You can read about the rest of them here if you're interested or need more information. 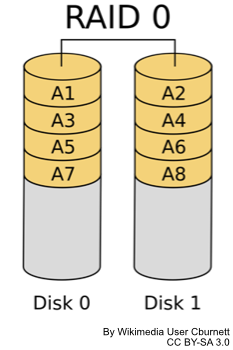 RAID striping is designed to speed up storage access by spreading the data across two or more drives. The RAID controller divides the data between the drives when it writes to them, and reassembles it when it is requested by the computer. As with all RAID configurations, the computer addresses the array as if it were a single drive.

By itself, RAID 0 does not provide redundancy nor have parity. What that means in simple terms is that if any one of the drives in the array fails or becomes corrupted, none of the data will be accessible to the system.

In the case of a drive failure, the data will be lost, and recovery will be very difficult (if possible at all). In the case of filesystem corruption, the data may or may not be recoverable using operating system tools such as CHKDSK (on Windows) or FSCK (on Linux or other Unix-like systems).

If the drives become corrupted due to the hardware RAID controller misbehaving, on the other hand, the chances of recovery go down considerably. It depends on how much damage is done before the machine goes offline.

In my own experience, most cases of failed RAID controllers on Web servers have required restoring from backup after replacing the RAID controller (typically after spending hours waiting for an FSCK to finish in the vain hope that the system could be saved). But maybe I'm just unlucky. 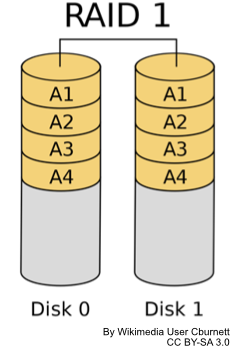 RAID mirroring simultaneously writes data to two or more drives in an array, so they are kept identical. Its purpose (and its only purpose) is to maintain uptime and avoid the need to restore from backup if one of the drives fails.

What RAID 1 does do is provide a way for a computer to keep doing whatever it is that it does if a hard drive fails. If all goes according to plan, the RAID controller will take the failed drive offline, notify the user of the problem, and keep running on the remaining drive(s). When the failed drive is replaced, the RAID controller will begin copying data to the new drive.

Because of the reliability of SSD drives, I personally don't use RAID 1 on workstations anymore. I'd rather use that money to invest in good backup software, an ioSafe, and online backup. Even back in the old days of mechanical hard disk drives, I personally experienced more downtime due to RAID controller failures than I did due to hard drive failures.

In short, unless you're willing and able to invest in a top-shelf RAID controller, you may well be increasing your chances of downtime by using RAID mirroring with SSD drives because you'll be adding another SPOF to your system. I've yet to meet an affordable RAID controller that was more reliable than a high-quality SSD. On the top shelf, yes, they're out there. But not within the budgets of most hobbyists. 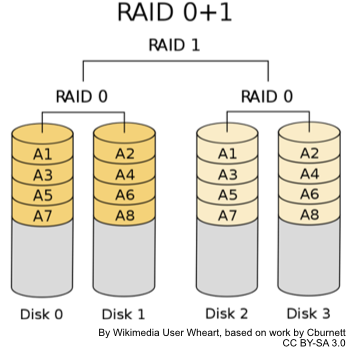 RAID 01 attempts to gain both the drive access speed advantages of RAID 0 and the fault tolerance of RAID 1. It's often called a "mirror of stripes" because it consists of two or more sets of striped drives that are in turn mirrored, as in the diagram here.

In terms of fault tolerance, a computer using a typical RAID 01 array in the more conventional four-drive configuration will continue to operate as long as all of the drives in any one group are functional. So using the diagram here, if drives 2 and 3 went down, the computer would keep running using drives 0 and 1. But if drive 0 and drive 2 went down, the array would fail. All the drives in at least one group of striped drives must be functional for the array to work. 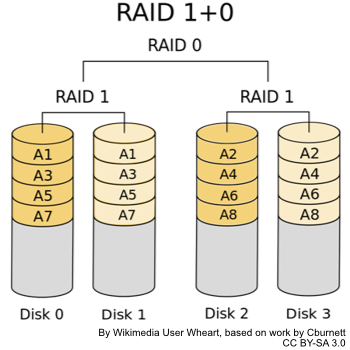 Just as RAID 01 is a mirror of stripes, RAID 10 can be considered a stripe of mirrors. In theory, this provides a considerable redundancy advantage over RAID 01.

In theory, RAID 10 therefore doubles the fault tolerance of RAID 01. In practice, given the reliability of SSD drives, I still maintain that the chances of a RAID controller other than a top-shelf one simultaneously corrupting both drives in a mirror are higher than the chances of even one SSD failing in a workstation computer, never mind the chances of two SSD's failing simultaneously.

I emphasize "in a workstation" because server drives typically do a lot more work than workstation drives do; and as a consequence, they fail more often. In a data center environment, drive failures and replacements are an everyday occurrence, and the clients usually don't even know they happened. RAID keeps the machines happily humming along. So yes, servers need RAID, and RAID 10 is the most common level used. In a workstation, on the other hand, I think anything but a top-quality RAID controller increases the likelihood of a failure.

Yeah, I get it. I'm starting to sound pretty redundant myself. The long and short of it is that if you're going to use RAID with a hardware controller, buy the very best one you can afford. You're better off using software RAID than a cheap hardware RAID controller. Which reminds me...

Hardware RAID refers to a system in which a piece of hardware called a RAID controller manages the RAID array independently of the operating system. The controller may be built into the motherboard, or it may be an expansion card.

The main advantages to hardware RAID are that a high quality RAID controller will be a bit faster than software RAID and will not use any of the operating system's resources. The best ones will have onboard processors, onboard battery backup, and a generous amount of cache (which serves the same purpose as a hard drive's onboard cache does).

The biggest disadvantages to hardware RAID are that good controllers are very expensive, and that they add an additional SPOF to your system. When we were using mechanical drives, the chances of a drive failing were higher than that of a high-quality RAID controller failing. With SSD drives in desktop duty, I'm not so sure.

If you use a hardware RAID card, be sure to check the battery frequently and replace it as needed, according to the manufacturer's instructions. Otherwise a sudden loss of power while the drives are being written to can corrupt the array. Some controllers use rechargeable lithium ion batteries, while others use the same CR2032 batteries that are used on most motherboards. Either way, make checking the battery part of your routine computer maintenance.

The disadvantages of software RAID are that it does use system resources, and that it tends to be slower than what a high-quality hardware RAID controller would deliver. Whether or not it noticeably slows down your machine depends on how well-provisioned the machine is and how you use it. Software RAID uses processing power to manage the array and system RAM as write cache. The faster the processor and the more RAM you have, the less likely the resource load of software RAM is to make a noticeable difference. But I've heard gamers say it created a very slight lag that most users wouldn't notice, but which did affect their gaming.