There are several different types of auxiliary drives available for your homebuilt computer, such as optical drives, tape drives, ZIP drives, and drive-like devices such as card readers. The installation procedures for all of these devices are pretty much the same.

Most new computers being built today don't have any of these drives. The functions they used to solidly serve have largely been taken over by USB flash drives, which are faster, more versatile, and available in much higher capacities. So in a way, this page is becoming obsolete and may be on its way to legacy status the next time I do a major revision of the site. 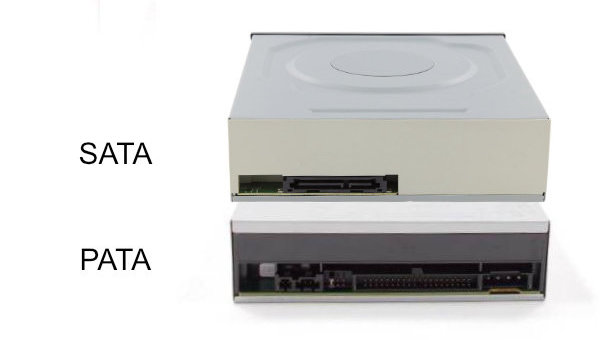 On the other hand, my site stats suggest that a lot of people land on this page because they want to replace a failed CD or DVD device; so it does serve a purpose.

In that context, it also makes sense to review the two kinds of drive interfaces because some visitors may be replacing older PATA optical drives.

The easiest way to tell what kind of interface a drive has is simply to look at the connectors.

PATA (parallel ATA) drives have two rows of pins for the ribbon data cable, and a row of four larger pins for the power connector. They are now obsolete, and replacements are hard to find.

This demonstration was photographed using a CD-RW drive on a PATA interface. SATA wasn't yet in wide use back then when these pictures were taken. It really doesn't matter, though. Other than for connecting the cables, the process is basically the same.

The process shown here will also work when installing a device like a card reader, except that there may be an additional connection to the USB header on the motherboard or to an add-on card. 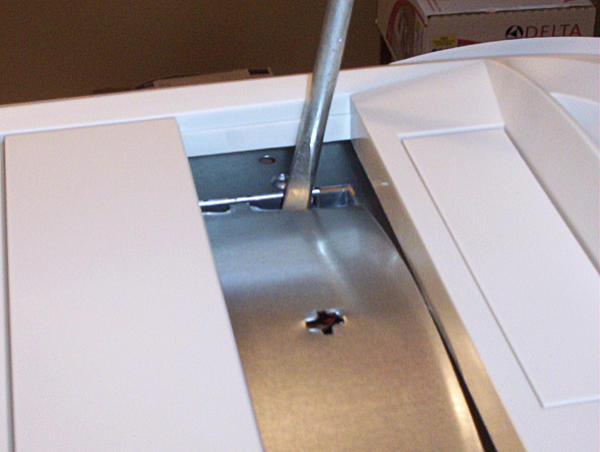 As with any other drive, the first step in installing an optical drive is deciding into which of the case's drive bay it will be mounted.

Unless you're using a server-type case, typically only one to three front-accessible bays will be available for drives that are accessible from the front. If you used all of those bays for internal drives, you have to move one of the internal drives to another bay.

Making a front-accessible bay available usually means removing a plastic cover over the drive, and sometimes the entire front of the case. It may also mean unscrewing or prying away a piece of metal case's metal chassis.

Wear eye protection and work gloves if you have to pry or cut metal, and be careful. You wouldn't want to hurt yourself or get blood all over your new computer.

If you're using (or replacing) an ancient PATA optical drive, you'll also have to determine its master / slave relationship and set the jumpers accordingly. If you don't remember how to do this, please review the pages on hard drive configuration, which begin here.

If you're replacing a failed PATA drive, just set the jumper the same way (that is, as a master or slave) as the one on the failed drive was set. (And if you're using a SATA drive, which is almost certain nowadays, you can just gleefully ignore all this talk of masters, slaves, and jumpers.)

When deciding where to place the drives, keep both convenience of use and cable routing in mind. Because tower-typed computers are usually placed on the floor or under the desk, the top bay is usually the most convenient place to install an optical drive.

Once you have decided on the drive configuration (and have put the jumpers where they belong if it's a PATA drive), you can begin to physically install the drives. 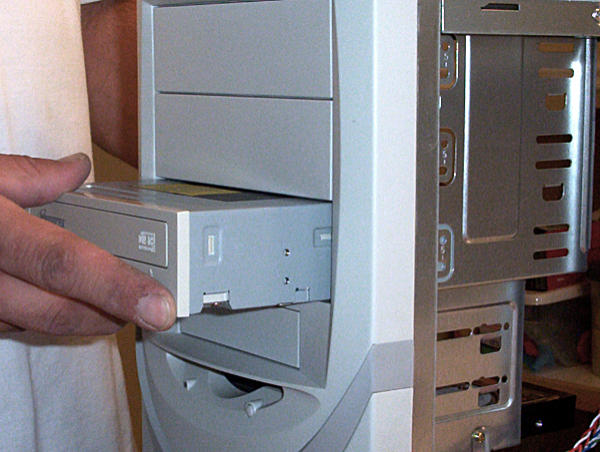 In most cases, the optical drives are secured directly to the case using screws. The drive is simply slid back into the case until its faceplate is flush with the front of the panel, and then is secured using screws. In other cases, it may be necessary to slide the drive in from the back or remove the front bezel from the case.

Be careful not to catch the drive's faceplate against the bezel of the case, or you may mar or damage the drive or the case.

Don't push too hard. If the drive won't easily slide in all the way, check to see what's blocking it. Some drives are slightly longer than average, and if you push them in fully without looking first, you may damage something in the case or on the motherboard. 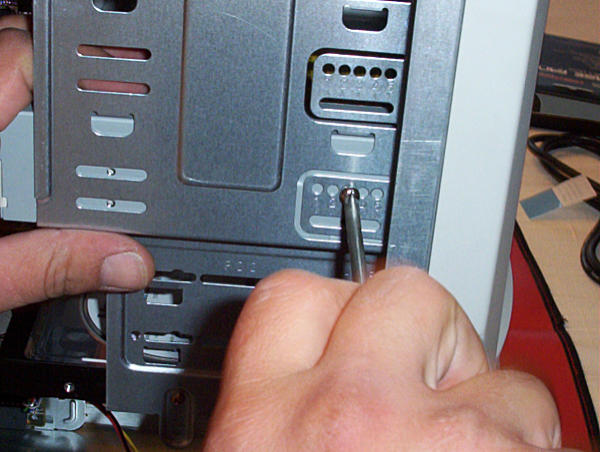 Once the drive is properly positioned, secure it into place with the mounting screws, and connect the data and power cables.

PATA optical drives usually use Molex connectors, but some really old drives use old-fashioned floppy-type power connectors (technically called "Berg connectors"). Again, this is something you won't need to worry about if you're building a new computer, but might need to know if you're repairing an old one.

Some optical drives also have a legacy analog audio connector that connects the drive to an analog audio input (usually labeled "CD Audio")on the sound card or the motherboard. It's very old technology and its highly doubtful that you'll ever need it. But it does no harm to connect that cable if your sound card or motherboard has an input for it. 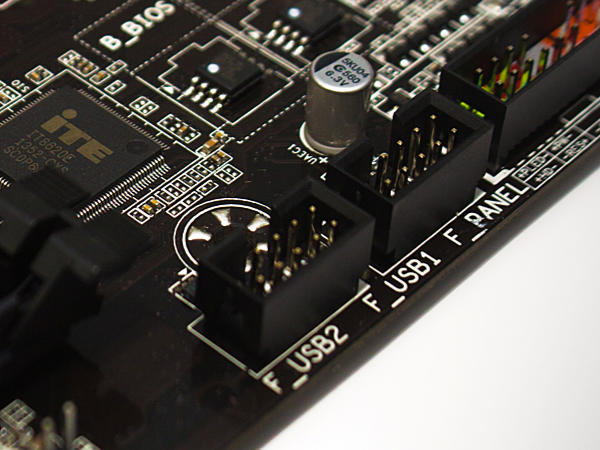 Many devices like card readers or hot-swappable drive bays can be mounted in the openings traditionally used for optical drives using the same method described above.

Connecting these devices to the motherboard, however, may be a bit different. Read the documentation for the device to know where it connects and what kind of power lead it needs.

In general, however, most card readers and similar devices connect to either an internal USB header or a SATA header. Some can use either one.

Other drive-like devices use a SATA interface instead of connecting to an internal USB header. These devices are simply connected to an available SATA header on the motherboard just like any other SATA drive would be. If you don't have any more SATA headers available, then you can install a SATA controller card in one of your motherboard's expansion slots to accommodate the device. Just make sure to choose a card that will work with the available expansion slot on your motherboard (PCIe, etc.). 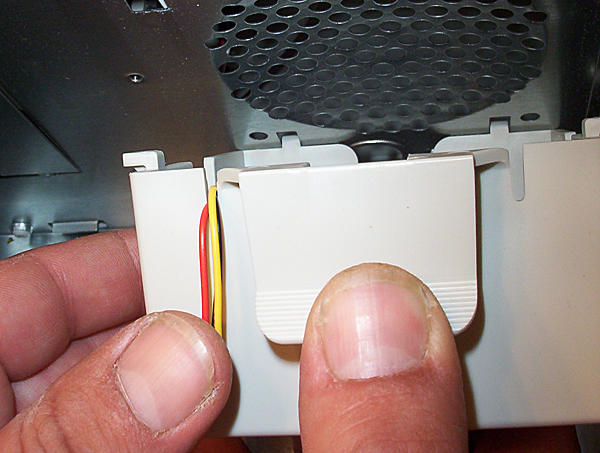 While we're at it, let's also install the cabinet or case fan.

Case fans create airflow through the case to help keep the internal components cool. They're essential on any computer used for gaming or other demanding applications, and are a good idea on any computer.

If your case doesn't already have pre-installed fans, then you should install at least one (and probably more, especially if you're a gamer or plan to overclock).

Make sure to choose fans that fit the openings on your computer case. There are different sizes including 60mm, 120mm, 140mm, 200mm, and others.

In this assembly, the fan housing was included but didn't come with a fan installed. A fan that was purchased separately was mounted in the fan shroud, which was in turn snapped into the computer case. Most modern cases use much bigger fans than this one, and they're usually attached directly to the case.

Next, let's install the Panel Connectors